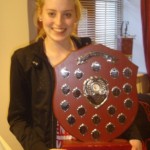 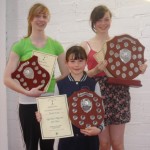 DyNamo Gymnastics Club hosted their club awards night on Thursday 21st April. The four overall club awards winners include:
Gymnast of the Year 2010 Kate Kivlehan: Kate was selected for DyNamo’s main Club Award, not only for her improved gymnastic ability, but for her dedication to the club and her pleasant, respectful, & supportive personality in the gym with her coaches and all her fellow gymnasts.
Tumbler of the Year 2010 Michelle Mc Cabe: Michelle received this award for her commitment in training and real effort to overcome new challenging tumbling moves in 2010.
Artistic Gymnast of the Year 2010 Rebecca Friel: Rebecca was selected for this new club award, as she received the highest artistic score across all competition levels in her partnership at the Club qualifiers and at the Western Regional Acrobatics Gymnastics Final.
Beginner of the Year 2010 Maedhbh McHugh: Maedhbh recieved this award for her astonishing improvement as a gymnast, who transferred from beginners to DyNamo’s intermediate class and then onto a competition class, and competed for the first time, all in 2010.
Class Awards 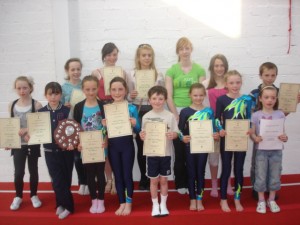 DyNamo Coaches would like to congratulate all award winners and acknowledge all the club gymnasts for their great work in 2010.